An event called Technical Meeting on Nuclear Forensics: From National Foundations to Global Impact was held at the International Atomic Energy Agency (IAEA) from 11 to 14 April 2022, with the participation of members from the CER Nuclear Security Department (NSD) and the staff of the RRSP National Bureau of Investigation Criminal Forensic Department (NBI CFD). The aim of the event was to provide a platform for the nuclear forensic laboratories of different nations, where the parties can share their current results of their research with each other.

This time the focus was on the joint work of the investigating law enforcement and the laboratories carrying out the scientific background work, in which the Hungarian parties (CER NSD, RRSP NBI CFD)

One of the professional features of the demonstration was that it was a more complex scenario compared to previous practices: one of the contaminated evidence was a smartphone with a fingerprint – as well as digital data relevant to the investigation – that had become difficult to collect due to the contamination. To solve this, a portable, so-called A “GloveBag” was used, which allowed for quick on-site data backup and collecting fingerprint before being taken to the Nuclear Forensic Laboratory.

The demonstration was a huge success, the experts participating in the Technical Meeting were significantly influenced by the demo, INTERPOL and the FBI also paid tribute to the Hungarian performance, and in the domestic environment the M1 News and several Hungarian news portals (Index, hvg.hu, Világgazdaság,…, etc.) reported the results.

Although the on-site presentation was one of the highlights of the event, it is also important to mention that the Hungarian delegation was the one present with the most abstracts on thi international stage. The event was taking place in challenging times (because of the COVID-19 and also the Russian-Ukrain war) and the organizers had to cast the poster section into a shorter presentation form at the event. It was also held in a hybrid way, so that it could be followed online too. From the members of the CER NSD, a “poster presentation” was given describing the activities of the laboratory’s research work related to the field of nuclear forensic science (András Kovács, Krisztián Roland Soós and Csaba Tóbi), while traditional presentation was given by Péter Völgyesi and Csaba Tóbi.

At a livestreamed event in Brussels on 5 July 2022, EUROfusion will celebrate the start of conceptual design activities for Europe’s first demonstration fusion power plant DEMO. This first-of-a-kind fusion device would demonstrate the net Read more… 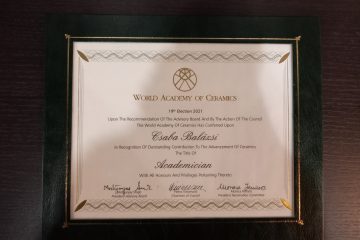 Dr. Csaba Balázsi was elected as Academician at the World Academy of Ceramics

Dr. Csaba Balázsi, scientific advisor of the Institute of Technical Physics and Materials Science, ELKH Centre for Energy Research was elected as Academician of the World Academy of Ceramics „ for outstanding contributions to ceramic Read more…

Dr. Béla Faragó, head of the International Scientific Advisory Committee of BNC, distinguished scientist of Institute Laue Langevin (ILL), was elected as external member of the Hungarian Academy of Sciences (HAS) in 2019. It was Read more…