Head of the Reactor Department:

The Budapest Research Reactor (BRR) is a VVR-type (water-cooled, water-moderated) Soviet design reactor. It went critical in 1959. The initial thermal power was 2 MW. The first upgrade took place in 1967 when the power was increased to 5 MW using a new type of fuel and a beryllium reflector. A full-scale reactor reconstruction and upgrade project started in 1986, and finished in December 1992. The upgraded 10 MW reactor received the operation license in November 1993. According to the Hungarian safety regulations, a periodic safety review (PSR) was conducted in 2002-2003, as a result of this the operation license was renewed in November 2003 that is now valid until further notice. After every ten years of reactor operation the periodic safety review report has to be prepared. The new one was worked out in 2012. In the frame of this project the reactor tank and the storage tank were inspected. 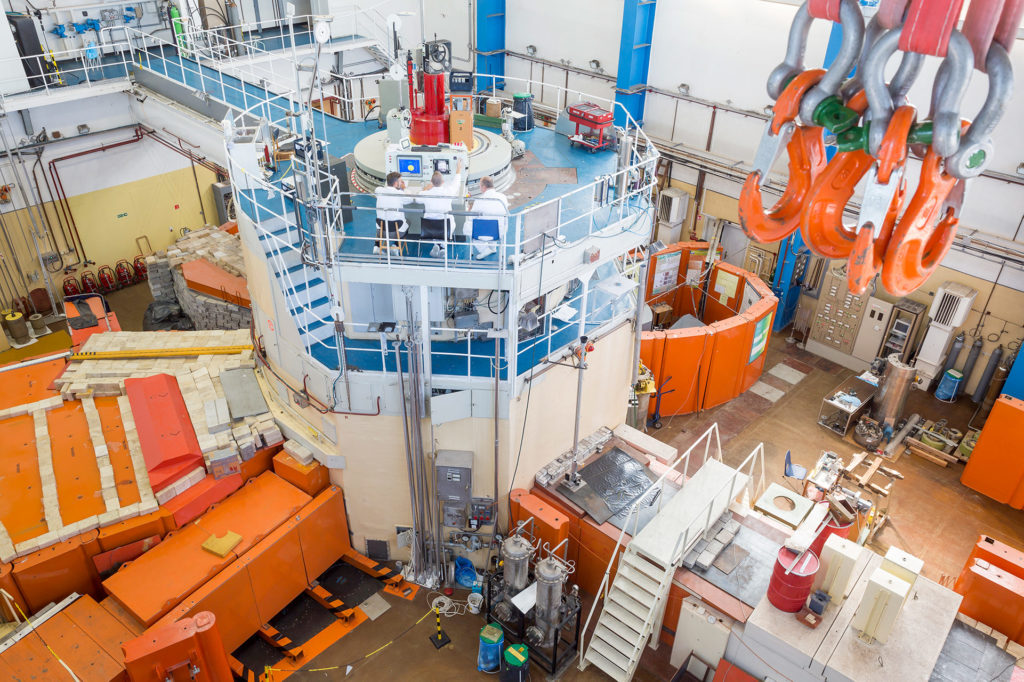 The conversion has been completed in 2012; the last high (36%) enrichment fuel assemblies were removed from the reactor core in November 2012.

Since its initial criticality, the BRR has been utilized as a neutron source for research and various industrial and medical applications. Irradiations are performed in vertical channels (the reactor has now more than 40 channels that can be used for isotope production and material testing) whereas physical experiments are carried out at the horizontal neutron beam ports.

Unfortunately, the isotope production was not significant in 2012 because of technical difficulties.

The reactor has ten beam ports (eight radial and two tangential) and nearly all of them are constantly in use. There are a total of thirteen so called ‘larger scale experimental facilities’ installed directly at the BRR’s beam ports or at the neutron guides originated from the cold neutron source. The scientific utilization of the research reactor is coordinated and managed by the Budapest Neutron Centre, which is a consortium founded by four academic institutions in 1993. Under the guidance of the BNC, the 15 measuring sites opened a possibility for BRR to be a regional centre. BNC participates in several EU supported programmes like NMI3 (Integrated Infrastructure Initiative for Neutron Scattering and Muon Spectroscopy), CHARISMA (Cultural Heritage Advanced Research Infrastructures: Synergy for a Multidisciplinary Approach to Conservation/Restoration) and ERINDA (European Research Infrastructures for Nuclear Data Applications). In the frame of these programmes European scientists can get access to the BRR experimental facilities.

While the reactor has been fulfilling its traditional mission since its first criticality, the operating environment – especially financial, safety, and security requirements – as well as user and public demands, have significantly changed in recent years. Thus, perceiving these changing demands a research reactor coalition was launched under the name of EERRI (East European Research Reactor Initiative) by the initiation of BRR. The exploratory meeting was held in Budapest, Hungary on January 28-29, 2008 at the invitation of the KFKI Atomic Energy Research Institute (AEKI). This coalition original was founded by 5 reactors but since the end of 2008 it has 8 research and education/training reactors with two observer institutions (see Table below).

The strategic goal of the coalition based on the existing capacities of the EERRI facilities is to offer improved services for the user communities in order to prepare themselves for the time of using leading-edge European facilities. Areas of Cooperation and Collaboration are: (1) education and training, (2) neutron beam application, (3) isotope production, and finally (4) irradiation of fuel and materials/PIE (Post Irradiation Examination).

Summarizing the activities of the EERRI coalition, a formalized and regular conversation among the RR operators has been established. Beyond this communication a joint work has also been developed on the four major fields. The goal of the EERRI is to establish sustainability and self-supporting strategy in order to improve the operation of the coalition.

The reactor is open for the public. Groups of visitors are welcome monthly (on the last Friday of the month). Special appointments are possible. Guided technical tours are frequently organized for the international nuclear community on the occasion of conferences and symposia held in Budapest or in the region (e.g. Vienna).

The colleagues of Budapest Research Reactor: